The road to Fada N’Gourma is a bit rough at this time of year. When it is completed, RN4 will be one of the better roads in the country. It is not yet finished. Multiple detours take the traffic out into the dirt paths beside the road, sometimes up to a thousand meters into the bush. Burkina Faso is greening up as the rains began in late May. Farmers and brick makers are busy all along the route, taking advantage of the arrival of water.

In June, the CSM team, Tom Castor and Nebié Badiou, started their trip at sunrise in a dated Toyota pick-up truck. Five thousand Simple Truths books were in cargo, fresh from the printer in Ouagadougou. The goal was to make a delivery, satisfying the request for books from the SIM churches among the Gourma people. There are nearly 40,000 believers among the Gourma people in the eastern region. The books were selected by SIM as a tool to help them give new believers a good start along the path of Christian discipleship.  The books had been translated into Gourmantché months before, but various challenges had prevented their showing up in print until a week ago. Now they were only a few hours away from becoming a tool in the hands of the church leaders there. The trip is only 220km. The roads make it 4.5 hours.

Upon arrival, all appropriate greetings were exchanged, followed by a set of explanations, training, and talk of how to best use the books. Then a gang appeared to help unload the truck and place the books in a room where they would store them until next week’s distribution. SIM has been working among the Gourma people for decades. The current leadership is indigenous to the area. The network is blessed with highly competent and experienced people.

After prayer and a small celebratory meal, the delivery crew headed back to Ouaga. Recent unrest and terrorist activity in Fada had motivated SIM to remove all of their European and North American personnel from the area, so the best advice was followed, and the team would make the 9-hour round-trip in one day. The air-conditioning in the small truck had not worked in several months, so the trip through the hot sun (38.5C / 100F), bouncing over the shadeless road required frequent rehydrating. But the team arrived safely back in Ouagadougou just before sunset, thankful for “traveling mercies.” 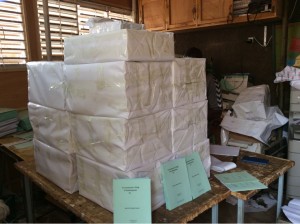 5,000 books at the printer in Ouagadougou 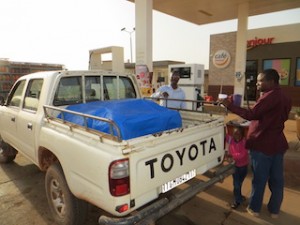 Preparation for the trip east 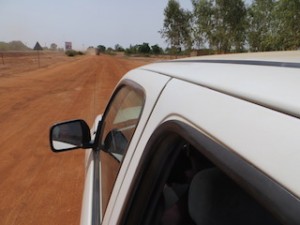 The road to Fada N’Gourma 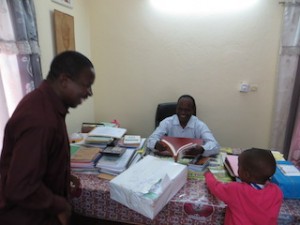 Nebié presents the book to the SIM President 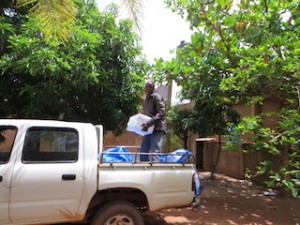 Unloading to the delivery center 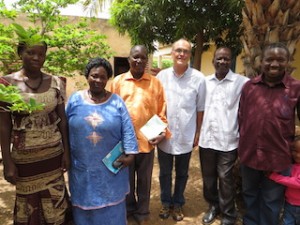