First books off the press in Burkina Faso

On Tuesday, October 11, the first set of newly revised Simple Truths books came off the press in Ouagadougou. 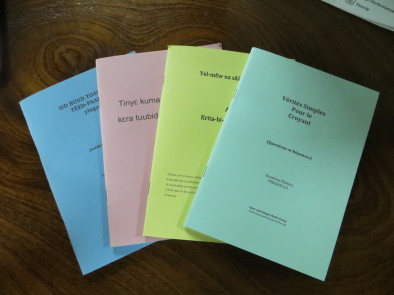 At the request of local pastors in Burkina Faso, Clear and Simple Media assisted in putting the “little book” in the French, Mooré, Dagara, and Jula/Dioula languages earlier in 2016. Over the next several months, pre-press copies were distributed for field testing by multiple churches in central and western Burkina. This week, final pre-press proofs were amended and edited, and now the latest edition is coming off the press. The first 100 copies of all four translations are in hand. The remaining 15,000 copies will be finished and “on the dock” by October 28.

A special thanks to all who have assisted Clear and Simple Media financially to make these translations and this printing possible.  If anyone would like to see what the Dagara, Mooré, Jula/Dioula, or French translations look like (or any of twenty other languages), visit the DOWNLOAD page at A Simple Word (www.asimpleword.org). The books can be read online there or downloaded from that site.